What Is Sickle Cell Anemia? 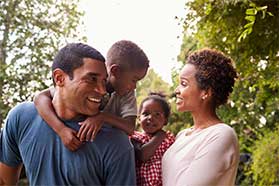 Sickle cell anemia, a severe form of sickle cell disease (SCD), is an inherited blood disorder in which abnormal hemoglobin—a protein in red blood cells that carries oxygen throughout your body—causes red blood cells to become rigid, sticky, and crescent- or sickle-shaped. These misshaped red blood cells can become trapped in small blood vessels, slowing or even blocking blood flow and denying oxygen to parts of your body.

SCD is considered one of the most common genetic disorder in the United States and, while there is no cure for sickle cell anemia, treatment is available to alleviate symptoms of the disease and prevent further complications. To schedule a consultation with a healthcare practitioner in Austell who specializes in sickle cell anemia treatment, call (770) 674-6311 or contact Dr. Gail Ravello online. 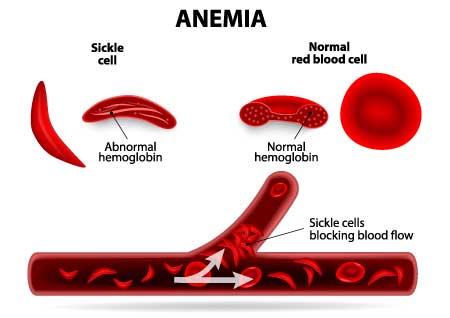 While 60-80 percent of those who suffer from SCD are of African American descent, people with Indian, Middle Eastern, Hispanic and Mediterranean heritage are also commonly affected.

Sickle cell anemia symptoms typically arise at a young age and tend to be more severe than other forms of sickle cell disease. The most frequently reported symptoms include:

If you suspect you or your child are experiencing signs of sickle cell anemia, it is important to meet with a healthcare practitioner. Your practitioner will conduct a physical examination, as well as review your medical history and symptoms thoroughly, to arrive at a sickle cell anemia diagnosis. A simple blood test that checks for hemoglobin S is routinely used to screen newborn babies in the hospital, but adults and older children can be diagnosed using the same test. If sickle cell anemia is suspected during pregnancy, your healthcare provider may recommend an amniocentesis to check amniotic fluid for signs of the disease.

If complications of sickle cell anemia have developed, other diagnostic tests may be necessary, including urine and blood tests, or imaging tests like a CT scan or ultrasound to detect organ damage.

The only potential cure for sickle cell anemia is a bone marrow transplant. This form of sickle cell treatment is typically reserved for severe cases in patients under the age of 16 due to the complexities and risks associated with the procedure.

Additional treatments for sickle cell anemia that focus on preventing complications and treating the disease's symptoms include:

If you suspect you or your child are experiencing sickle cell symptoms, It is important to meet with a healthcare provider experienced in sickle cell anemia treatment to help avoid potential complications, including stroke, organ damage, acute chest syndrome, leg ulcers, and blindness. To meet with a practitioner in Austell who can help you cope with the disease, call (770) 674-6311 or contact Dr. Gail Ravello online.

Meet with a Sickle Cell Disease Specialist in Austell
Request Your Appointment Today!

Hi, I am available to answer any questions.
Also, I am currently accepting new patients