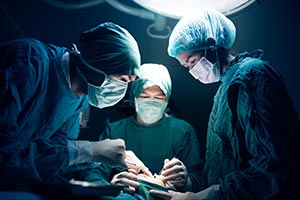 What Is a Colectomy?

A colectomy is a surgical procedure that removes all or part of the large intestine (colon). It is recommended as a treatment for many serious colon diseases, like cancer and inflammatory bowel disease, when other treatments have either proven unsuccessful or are not an option.

There are many different types of colectomies, named based on how much of the digestive tract needs to be removed:

A study done for the journal Annals of Surgery found that more than 260,000 colectomies are performed in the US every year.

To schedule a consultation with a colorectal surgeon in Hawthorne who specializes in colectomy, call (201) 806-6099 or contact Medwell Orthopedics & Functional Medicine for Men & Women online.

Why Is a Colectomy Performed?

The goal of a colectomy procedure is to remove the diseased parts of the colon and re-attach the remaining healthy potions of the colon.

Colectomies are usually used to treat colon cancer or precancerous colon polyps, but they can also be used for treatment of:

While a colectomy is ordinarily done in the event that other therapies are not available or have not been effective, it may also be done as a preventative surgery if you are at genetic risk of familial adenomatous polyposis (FAP) or hereditary nonpolyposis colorectal cancer.

How is a Colectomy Performed?

A colectomy is performed under general anesthetic.

There are two ways to perform the operation:

The manner in which your digestive system is reconstructed after the operation depends on the kind of colectomy surgery you received. There are three types of reconstruction:

What Should I Expect After a Colectomy?

After surgery is completed, you will spend between 1 and 5 days in the hospital to allow your digestive system to heal. During this time, you will receive liquid nutrition intravenously, and in time, slowly transition into consuming clear liquids and then solid food. You will also be instructed by medical staff on how to adjust to your reconstructed digestive system.

Once you return home, colectomy recovery may take 4 to 6 weeks. During this time, it is generally advised that you:

Your surgeon will give you specific instructions on what activities to limit, how to limit them, and when you can return to normal activities. You may also be given medication to treat pain and prevent blood clots, infections, and constipation.

The risks associated with a colectomy are based on your general health, the type of colectomy you have, and whether or not you have an open or laparoscopic colectomy. Potential colectomy risks include:

If you have serious colon disease, a colectomy may be a permanent cure for your illness.

To make an appointment with a colorectal surgeon in Hawthorne, call (201) 806-6099 or contact Medwell Orthopedics & Functional Medicine for Men & Women online.