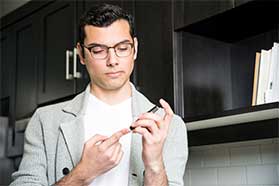 When we eat, our digestive system coverts the food into a sugar called glucose, which is the fuel that our bodies use to operate. Glucose enters the bloodstream and travels to all the cells in your body. While this is happening, our pancreas produces a chemical called insulin. Insulin helps our cells absorb the glucose.

Diabetes is a chronic disease that occurs when there are high levels of sugar in your blood (high blood glucose). The condition affects more than 20 million people in the United States alone.

If blood sugar levels are not within a healthy balance, both short-term and long-term problems can occur; this is why seeking diabetes treatment is imperative to maintain your overall health.

To meet with a diabetes specialist in Hawthorne who can help you identify and address your health concerns, call (201) 806-6099 or contact Medwell Orthopedics & Functional Medicine for Men & Women online.

Diabetes can refer to a few different scenarios. In one instance the body doesn't produce enough insulin, so the glucose cannot be properly absorbed by their cells. This condition is called Type 1 Diabetes and is mostly found in children, teens, or young adults.

In the second scenario, a person's body may be producing enough insulin, but for some reason their cells resist it , causing the glucose levels to build up in their blood. This is called Type 2 Diabetes and mostly affects adults. It is also the most common form of diabetes.

In cases of type 1 diabetes, the symptoms develop quickly and are generally apparent by the time a diagnosis is made. Type 2 diabetes symptoms develop over time, and it could be years before the person even knows they have it.

The most common way for a healthcare provider to diagnose diabetes is by administering a urine or blood test to check sugar levels in your blood. The most popular blood test utilized is the Hemoglobin A1c (HbA1c) which gauges your average blood sugar levels over time.

Because some cases of diabetes don't initially show any symptoms, any person over the age of 45 should be regularly tested. It is also recommended that any children or adults dealing with weight problems also schedule periodic diabetes screenings.

Unfortunately, there is no cure for type 1 diabetes, and those afflicted will require insulin injections the rest of their life to regulate the glucose levels in their blood. Insulin injections are ordinarily short-acting, but immediate-acting insulin like NPH insulin can be taken if necessary.

Type 2 diabetes can often be controlled with lifestyle changes. One of the most common causes of type 2 diabetes is being overweight, as an excess of fat cells in the body makes it more difficult for the other cells to absorb insulin properly. In these cases, your healthcare provider may recommend a program that includes a combination of medication, dieting, and exercise..

If you experience symptoms of diabetes, seek the guidance of a healthcare practitioner who can help get your health back on track. Call (201) 806-6099 or contact Medwell Orthopedics & Functional Medicine for Men & Women online.