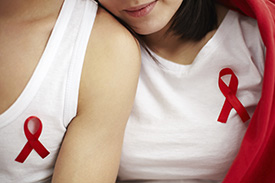 HIV stands for “human immunodeficiency virus”. The virus is passed on via the transfer of bodily fluids. Early flu-like symptoms (often classified as “acute HIV”) typically develop within the first two months of infection. Symptoms may last for a few weeks as the virus spreads rapidly. The next stage of development is called “chronic HIV” and can persist for over a decade if left untreated. This stage is characterized by swollen lymph nodes, diarrhea, weight loss , fever and fatigue . HIV can be transmitted via:

Some support groups and counseling resources are available to those with infected with HIV/AIDS. Medical treatment is available to reduce the symptoms and slow its progression. Request more information about HIV/AIDS today. Call (423) 482-8711 or contact Dr. Dalal Akoury online.