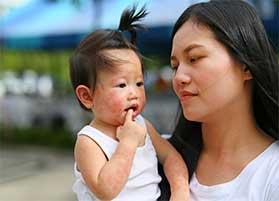 Scarlet fever is contagious and poses a risk to those around you, signaling the importance of addressing your condition with a healthcare provider. Left untreated, scarlet fever poses serious risk for health conditions affecting the heart, kidneys and other parts of the body. To schedule a consultation with a qualified healthcare provider in Johnson City that specializes in scarlet fever treatment, call (423) 482-8711 or contact Dr. Dalal Akoury online.

If you are affected by scarlet fever, it is important to avoid public settings (such as going to work) for 24 hours, until your fever subsides, to ensure the infection doesn't spread; by that same token, if your child is plagued by scarlet fever, keep them out of school for a 24 hour period. Schedule a consultation with a qualified healthcare provider in Johnson City that specializes in scarlet fever treatment. Call (423) 482-8711 or contact Dr. Dalal Akoury online.